What started as a crazy idea turned into the biggest (and most fun) direct river conservation action in Europe. Rok Rozman, a former Slovenian Olympic athlete in rowing, had enough of listening to complaints about funding, organization and bureaucracy needs and he decided to act. He kayaked across six countries, and after two years, Balkan Rivers Tour has evolved past just a ‘tour’ and has turned into a movement. A movement in defense of wild rivers of Balkans.

During his visit to Montenegro in February of 2020, Rok Rozman got an overwhelming feeling of suspicion that the spring would be nothing as he had imagined. "We were amid the preparations for the Balkan Rivers Tour 5, the largest direct campaign to preserve rivers of Europe, which we have been organizing since 2016. My colleagues and I did the last field inspections, agreed on everything with the hosts, arranged dates ... It was wonderful. Beautiful nature, beautiful weather, sightseeing, rivers, wonderful people. Then the news reached us that the Slovenian Government had fallen. And immediately following that, speculations started about who would be the new Minister of the Environment. And then, the epidemic. Canceling all plans for spring and summer, all international initiatives, and first and foremost, the Balkan Rivers Tour 5. This spring is going to be tough, we told ourselves. Unfortunately, we were right," said Rok Rozman.

Over the following weeks, Rok Rozman was in the media's limelight after he had organized several protests with like-minded people against limiting the role of nature conservation fighters in decision-making processes on infrastructure projects and against tightening conditions for actions of public interest. More than 36,000 people have signed Narave ne damo! online petition so far. Rok Rozman was taken away by police from a protest in front of the Ministry of Environment. Minister Vizjak mentions him by name in his speeches and attributes him "anarchist-extremist activities". It is not easy to stay calm in such a torrent. But Rok Rozman, a biologist by profession, is also a wild water kayaker, a former Olympian convinced that the best answer to everything can still be found where "nature and common sense speak among the canopy, the rays, the deep breaths, and the silence of the fish and the sages."

Give nature a voice

"I grew up there: by the river Sava. From morning to evening, I ran among the fields and animals on our neighbors' farm. The language of nature has always been my language. Above all, the language of the river. My father was a fisherman, so I spent a lot of my childhood by the Sava; I quickly fell in love with fishing and kayaking. In water, under water, on water: it has become my everyday life, which I still live today," explains Rok Rozman his connection with rivers.

"You feel the river differently in a kayak. You look at it with different eyes. You notice its hidden canyons, meanders, insects, whirlpools, clouds, and you meet the people who live on and off the river ... The more I paddled the rivers, the more I saw the horrors. Garbage, wastewater, dams that brutally destroyed the once diverse aquatic life. I have seen deforestation, the destruction of swamps, the permanent damage that man has inflicted on rivers to pursue his insatiable pursuit of profit. If you grow up that way and spend so much time on the water, something in you will break at some point. If you are not completely arrogant and blind to beauty, it becomes clear to you that nature and people, pushed to the margins of society, need help and protection."

The Balkan River Defense movement was born, and in 2016 organized the Balkan Rivers Tour 1 for the first time in the wild rivers of the Balkans. "We connected six countries, Slovenia, Croatia, Bosnia and Herzegovina, Montenegro, Macedonia, and Albania. More than two thousand people from 18 countries participated, 502 of them on the water. We rowed, walked, and swam for 36 days on rivers threatened by dams. In front of the Albanian Prime Minister's residence in Tirana, we organized a protest, which was crucial in raising awareness and later stopping the construction of the destructive dam Pocem on the river Vjosi," recalls Rok Rozman. 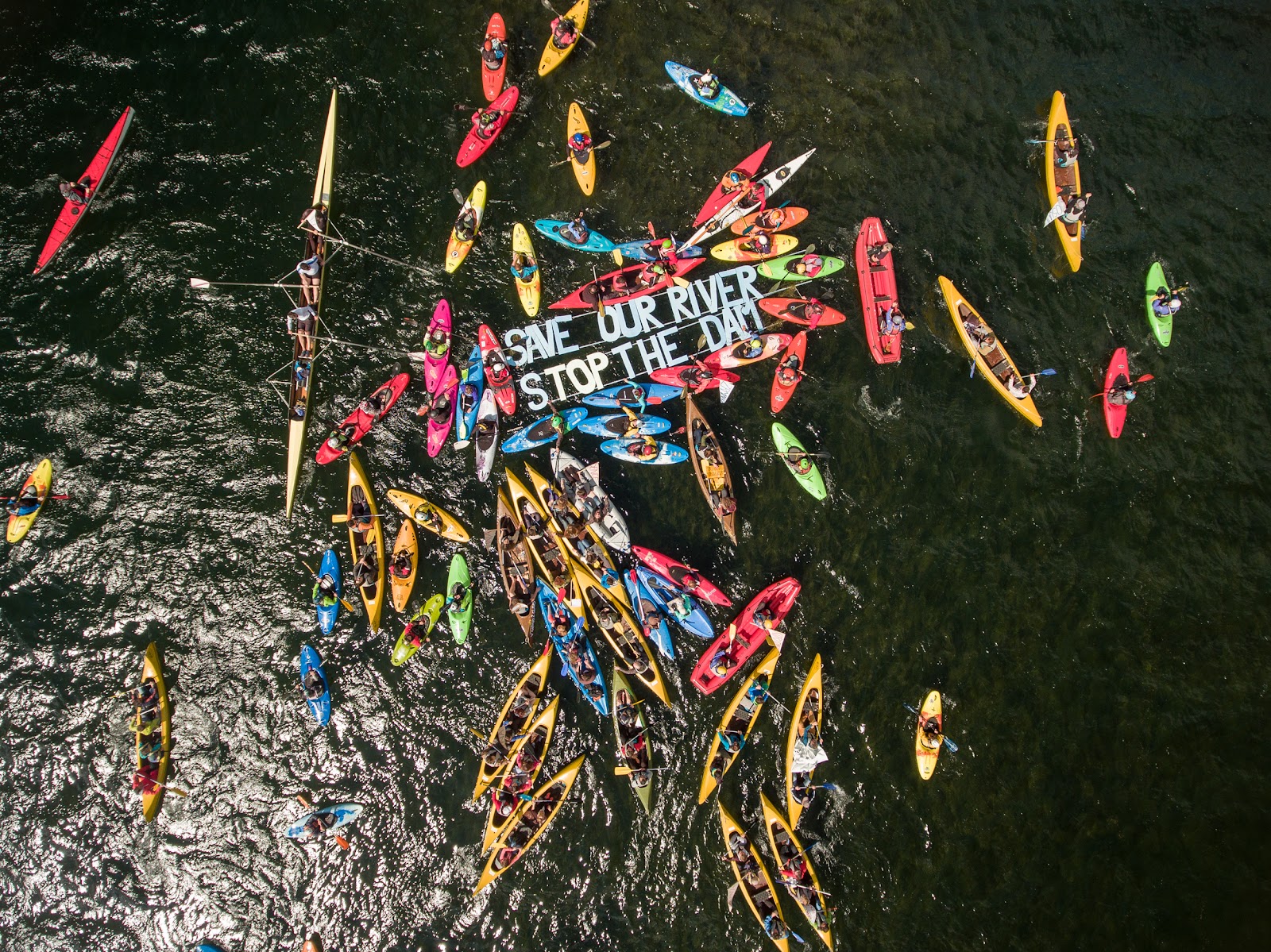 Rok and supporters kayaking together to protest the construction of dams

"Every year, we warn of other dangers, a new dam or reservoir that threatens Balkan rivers and villages. The way we work is always the same: our presence warns, raises awareness, attracts attention. We come with kayaks, canoes, banners, photographers, international media following us every step of the way. We bring microphones to those that are not otherwise heard." Rok Rozman remembers well the moment when he first refused an interview for a local television station and referred the journalist to a local Albanian shepherd. "When he talked about his river, all of us nearby got chills. His words were wise! The wisdom of a man who can speak to nature because he understands that it allows him to exist. That is when I realized we were doing the right thing. It is not our job to respond to shouting with a shout. Let our whisper that is necessary for survival be heard," summarizes Rok Rozman. 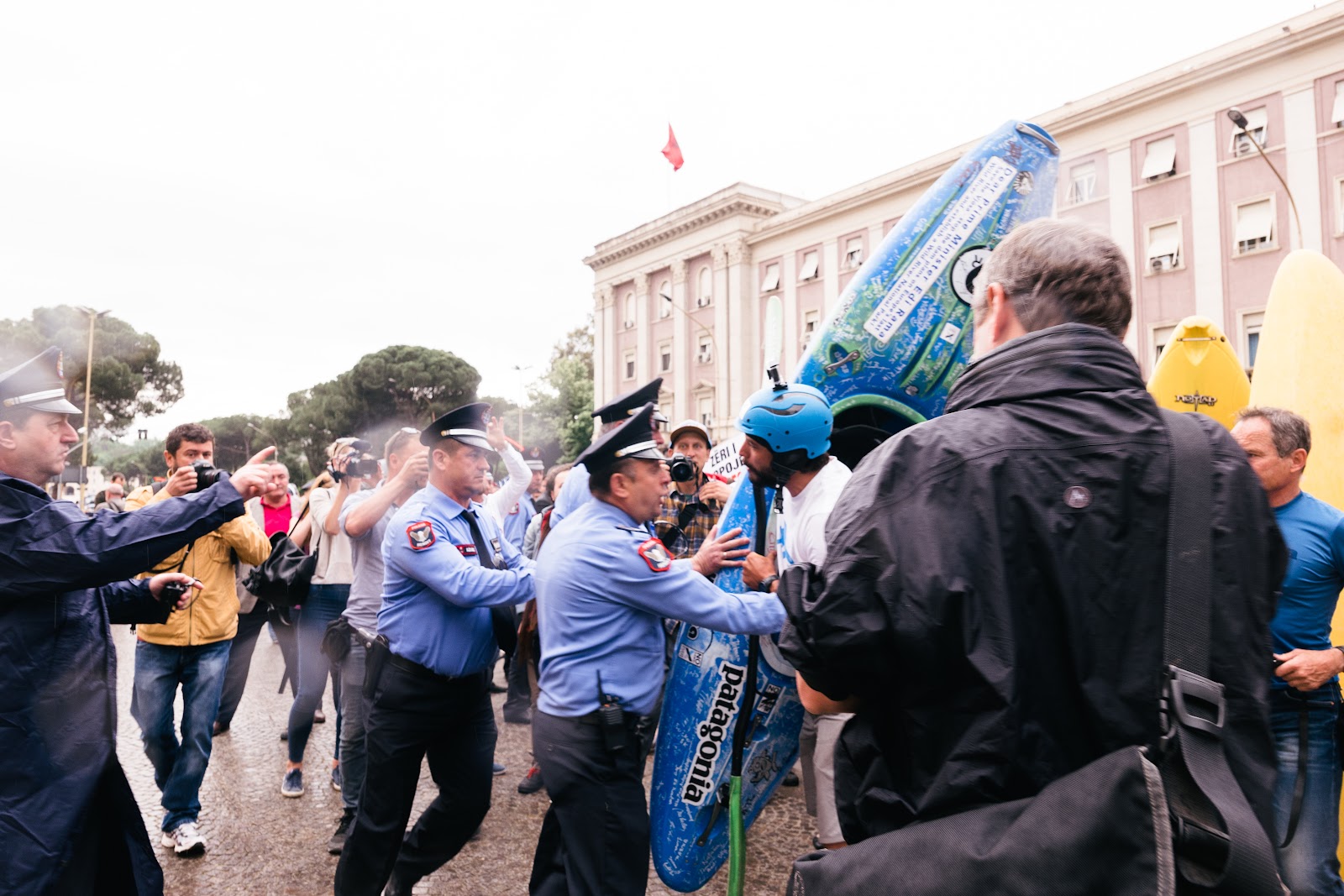 Police pushing back on protesters fighitng against the construction of dam

Balkan River Defense is a civic movement. Anyone can join it, whether by joining in on the actions, organizing events, donations, or daily activities for rivers and nature, you are invited! It advocates for a healthy environment, which is everyone’s right.